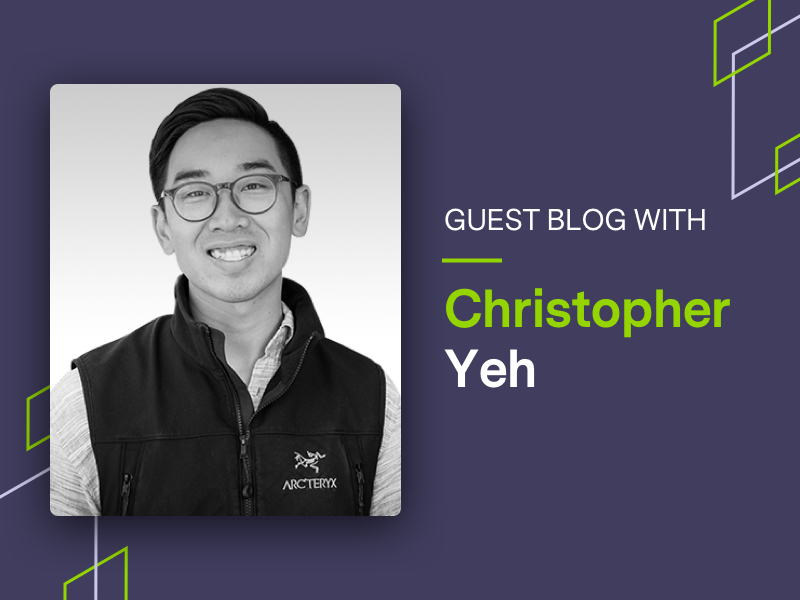 In early November, we were lucky enough to have Chris Yeh join the panel at our first Disclose. Discuss. Discover. event in Vancouver. He inspired our attendees with his insights and practical tips for balancing HR tech and human touch.

So we grabbed him for 15 minutes to dig a little deeper into what it is that he does, and how he sees the future of the recruitment industry.

Tell us a bit about what you do at Clio

I’m the Senior Manager of Talent Acceleration, a function that includes four broad categories. One is our acceleration programs category, which encompasses all the programs associated with speeding up the performance of the company and our people. Another piece is acceleration partnerships, which is a little bit like what you might expect of traditional HR business partnerships but with a much more organizational development orientation to the partnership approach.

The third area is performance coaching, which is pretty self-explanatory, but the idea is bringing the coaching function that one might see at an executive level with external coaches into the whole company and offering it as an avenue of performance development.

Then the last piece is talent operations. One of the things that we are seeing as the company continues to grow is that all of the mechanisms and processes we have to ensure people are supported and have a top-notch experience require great operational excellence. We have many different tools to support that experience, but it's hard to maintain that across individuals. One of the things that we aim to do is centralize it, to hook everything up together so it becomes a catch-all, and to be able to provide data that informs where we are strong and where we need to focus more of our efforts.

Clio is a really interesting business - can you tell us a bit about it?

Well, firstly, the company wasn't founded by lawyers, which I still find very fascinating. It was actually founded by a couple of folks peripherally related to law: Rian Gauvreau, who worked in one of Canada's largest law firms as an IT manager, and his childhood best friend Jack Newton, who had built up a career In computer science. 10 years ago, they decided to take a stab at starting a new business together, and Clio was formed.

Clio is in the business of transforming the practice of law for good. We have been focusing on legal practice management software; the idea is to produce and provide a cloud-based software that allows lawyers, small and medium sized law firms, to really manage the entire practice of law in the cloud. We've seen great success in that in the last decade.

The majority of our customer base is in the United States, but we are now a fairly global company with law firms using our product out in the UK, in Australia, and even in Singapore. So we're gaining a global reach.

In just the past month or so, we've been expanding what transforming the practice of law means beyond legal practice management. We've now acquired a company called Lexicata, a company that focuses on client intake for lawyers. In the legal tech space, this means that we are now a technology company focused on the entire experience of law from end to end.

We're fairly sizeable. We are a team of 12 across the entire talent function and then within my team, there are six including myself.

There are essentially two different umbrella functions within our team. There's talent acquisition, which focuses on bringing in great people and talent acceleration, which is our group, that basically takes care of everything that happens after someone is brought through the door.

We see our role as “get, keep and grow”. “Keep and grow” are the areas that are within my team's remit and then “get” is very much the focus of the talent acquisition side of things.

How would you describe the culture at Clio?

One of the things that we're really driving towards across the company is to be a human, high-performing organization. We aspire to be on the scale of the likes of Amazon and Salesforce, while still maintaining that essence of what it's like to be a human organization.

Part of that requires balance, but the other part of it means being able to truly integrate work and life. There's still the notion in some organizations that when you come into work you never talk about life. We want to be more human around some of that, and allow people to build true, human connections through relationships with colleagues.

What we're trying to do is really build that community and the human part of working into the workplace.

What does recruitment look like for you and how has that changed?

I would say the recruitment process surprisingly actually hasn't changed too much at Clio. Where I think we did really well even right from the beginning was to have a fairly structured process. Where things really shifted over the last three or four years was in codifying some of the things that were a little bit more nuanced.

As you mature as a company you end up focusing more on the values. How are people expressing the values in their own way and are they going to bring in new ideas, new insights, new perspectives? That was one big shift for us. It became more about how a person is adding to the culture, rather than if they were just “fitting into” the culture.

I would say the other shift that we've had is becoming a little bit more structured in terms of the recruitment process itself. We've had different stage gates and those gates themselves haven't changed in terms of how you describe them. Initial phone screening, an interview with a SME, a project that's relevant to the work and then a culture screen of sorts. That hasn't shifted, and that's worked well for us.

It's the projects and how we actually debrief around them that we've added more context to, to make sure we're testing for the right things instead of just at a surface level.

I think, in the early days, we didn't really have a concept of raising the bar through hiring, but nowadays a question that we always pose for ourselves is, “is this next person coming in raising the bar for everyone else in that team?” If the answer is no, we're probably not going to hire them.

What are some of the biggest difficulties you've had since you started at Clio?

I would say almost everything has been a difficulty! It’s changed a little bit every year, so there's been no consistent challenges and I think all of them are associated with their respective stage of growth.

When I first started, I think one of the major difficulties was deciding how we actually plan further ahead instead of being completely reactive. We had three people back in the day, then we were supposed to double the size of the company. One challenge we definitely had was forecasting for the kind of folks that we needed and planning for how the organization was going to grow – the org design side of things.

Around a year after that, it became a bigger question of how we scale culture globally, which leads you into conversations of values, distilling of culture, and how that plays into the entire talent lifecycle.

Now, more than ever, the challenge of scaling becomes a more permanent thing to think about, because there are fewer and fewer companies that have gone through the same kind of growth that we have. What we're faced with now is that we’re probably going to grow to 500 people in the next year and 1000 after that, before we decide on where we want to take the company. So we must make sure all the things we built up today will scale up with the rest of the company.

What team achievement are most proud of?

That would probably be the launch of our Basecamp Leadership Program. We launched it last November; that was the first cycle that we've ever gone through and in that programme we focused on educating and facilitating for four key skills; feedback, accountability, communication, and coaching. It was a three-day programme at that time and we put through all of our executives, all of our directors and all of our managers in one go and walked away with our exec saying we want that for every person in the company.

They wanted us to keep bringing leaders within the company through the program so that we have a shared language around how we want to approach the four key skills. So, since then we've run four cycles of our Basecamp program and we'll be continuing to do so in the next year.

What do you think will be some of the biggest HR trends in the next year or so?

I think the biggest thing is probably moving even further away from transactional HR. Everything is being automated now.

The thing that we'll end up with in the future is actually a bigger ask on HR professionals to really own people and culture. In the last little while, we've seen a shift away from talking about “HR professionals”. That has almost now been relegated to operations. People and culture now has a bigger mandate around the development of the organization.

What skill or a trait do you think the HR industry currently lacks?

I think it might be tech savviness and I say that for a couple of reasons. I think when it comes to where HR is going, the need to automate a lot of our transactional tasks requires a good idea of how to automate things and what tools are available. I've noticed it is not a core proficiency amongst a lot of HR folks unless they work really closely with the HRIS side of things.

Secondly, with where the technology is going right now, we are seeing almost a proliferation of specialized tools. There's a tool for onboarding, there's a tool for recruitment, there's a tool for x, y and z. At a certain scale, what will actually make things effective and more useful for everyone in the company is somehow being able to tie them and the data they offer together.

What final thought would you like to leave us with today?

I love the direction of people and culture. I'm super inspired, super optimistic and interested in how it’s all still emerging. We’re in a time where the entire world of what it means to be working in HR and people and culture is a little bit nebulous, as something that to me seems to be a space in midst of reinvention.

There's new ideas, there's new thinking, and there's an expectation now, not just a reliance, on pulling from other industries. That for me is awesome because I think HR has, in the past, always been viewed as a bit of a cost centre.

I think it's exciting to be viewed as an actual value-add to the business - it’s all HR people strive to do. It's less about how to get a seat at the table now, and a lot more about what you do with it.

Having spent nearly five years with Clio, Chris has built nearly all facets of the talent operating system during Clio's stage of hyper growth. As Senior Manager of Talent Acceleration, Chris oversees four strategic areas of Talent at Clio: Acceleration Programs, Talent Operations, Performance Coaching, and Business Partnerships. Chris holds a BSc. in Psychology from The University of British Columbia and a MSc. in Organizational Psychology from The London School of Economics. He has also been trained as a coach through the Coaches Training Institute (CTI) and is pursuing his ACC and CPCC designations.