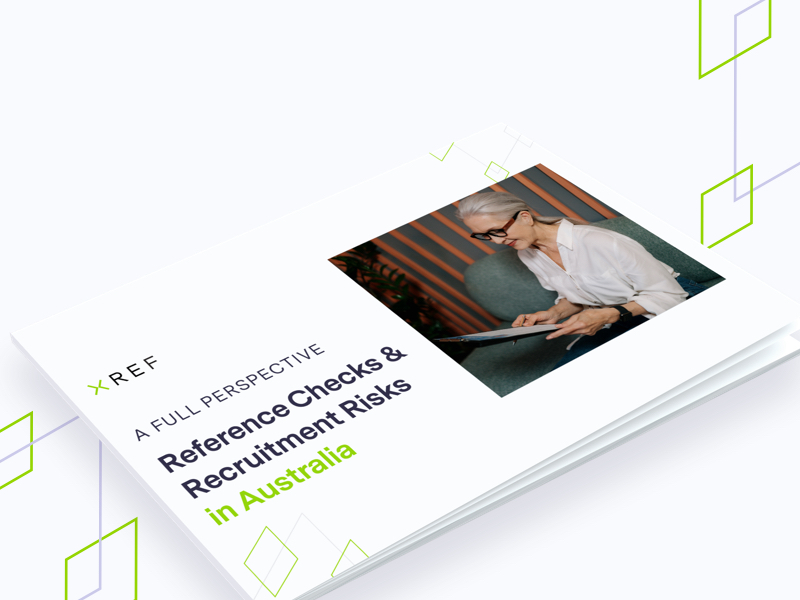 Xref, the cloud-based candidate referencing platform, was launched in 2011 by experienced HR and recruitment professionals.

It was developed to address a key industry issue: the inefficiency, inconsistency and vulnerability of the traditional phone-based reference checking process.

With hundreds of reference checks passing through the platform every day, Xref is confident the solution it offers clients helps to tackle reference checking pain points and helps clients understand their industry, market, their talent pool, and the solutions available to them.

Xref recognised a need for independent, third-party data to help it quantify the problems it was addressing, and to support the advice and recommendations it was offering.

This led to an Xref commissioned research to take a closer look at the hiring process - specifically reference checking - surveying 1,000 Australian jobseekers aged between 18 and 39.

The level of “fraud” a candidate applies during the reference checking process varies.

Some candidates will - somewhat predictably - choose a referee they think will be favourable rather than the most appropriate person.

Others will actively encourage a referee to lie on their behalf.

The headline finding of the Xref Recruitment Risk Index is that 71 per cent of respondents admitted they had exploited flaws in the reference checking process to improve their chances.

This figure alone is alarming for recruiters and HR managers, but it becomes even more concerning when the data is broken down by the options available in the survey questions.

The most common methods adopted by candidates to deceive employers are avoiding choosing someone who might give a bad reference (56 per cent) and choosing a good reference rather than the most appropriate person (51 per cent).

Beyond making a strategic decision about who to put forward as a referee, 42 per cent of respondents also admitted to having deliberately lied to a potential employer.

Recruiters assume and accept some level of exaggeration by jobseekers and the question asked included responses such as:

However, what offers the greatest surprise is the fact that 23 per cent of respondents were willing to admit they’d actively encouraged a referee to lie on their behalf by exaggerating their experience or pretending to be someone they were not.

Traditional phone-based reference checking is - by its nature - inconsistent.

Often, due to resource constraints, this time-consuming task is left to the most junior team member.

In other cases, especially in small businesses, the process is conducted by someone with no experience in HR or recruitment.

The research found that inconsistencies and inexperience results in discriminatory questions being asked.

Three in ten survey respondents (29 per cent) that had acted as referees were asked for inappropriate details, including the candidate’s age (15 per cent), whether the candidate has children (11 per cent), their marital status (10 per cent) and their sexual orientation (seven per cent).

A lack of standardisation in reference checking leaves organisations open to risk.

Although most organisations produce a script or questionnaire to be used for reference checking, the conversational nature of a phone call will inevitably often lead to questions outside of the agreed scope.

This lack of control puts the organisation at risk, even if the relevant due diligence has been carried out to avoid it.

3. Inefficiencies in the reference checking process and the impact on the employer

The war for talent is becoming more competitive than ever, particularly as our talent becomes increasingly accessible by international markets.

The ability to compete for the best recruits, on a global scale, requires efficient, flexible and robust recruitment processes.

It also found that 42 per cent of the candidates had abandoned their job applications, specifically due to delays at the reference checking stage.

With a slim chance that a candidate has applied for only one role at a time, and a high possibility that they will be willing to forgo a job if the process takes too long, it is critical that businesses recognise the impact of ignoring the need for an efficient and candidate friendly reference checking process.

Getting it right will differentiate a business and enable it to attract the best talent.

4. The burden of reference checking on employers

As previously highlighted, reference checking is often left to an individual with little or no experience in recruitment.

Aside from the risks, this poses in terms of consistency and discrimination, it can also have a significant impact on the performance and resources of a team that could otherwise be conducting revenue-generating work.

Although reference checking is part of the day-to-day role of recruiters, the research found that 88 per cent of candidates made at least one application directly to an employer.

For a small, in-house HR team, the burden of having to request, coordinate and chase referees for responses can have a major impact on the value an individual is adding to their role.

Perhaps as a result of this burden, 19 per cent of references were found to have gone unchecked.

As part of the same research project, Xref asked more than 1,000 users (past and present) the same questions as the survey conducted with the Australia-wide sample.

While they had used Xref at least once, the respondents were asked to answer questions based on jobs applied for in the last two years – meaning that some responses would be in relation to a non-Xref reference checking experience.

Despite this, Xref respondents were found to have lied less, faced fewer problems and were happier with the process.

This was attributable to three key observations:

Unlike the 71 per cent of those in the Australia-wide sample, only 47 per cent of Xref users admitted to misleading potential employers, and 13 per cent had deliberately lied.

While still not perfect, it is worth remembering that it is impossible to determine when the misrepresentation occurred, as many of them will only recently have begun using Xref - but it’s notable that it is less than a third of the Australia-wide sample.

Xref provides a level of security that cannot be met through traditional phone-based methods.

The platform’s algorithm detects any inconsistencies or concerns in the details a candidate provides for a referee and, if these are identified, it alerts the client and offers the opportunity to question the candidate.

Xref’s process itself is a strong deterrent for those who would otherwise consider exploiting the system.

Importantly, only four per cent of the Xref users had encouraged a referee to lie on their behalf.

The platform offers transparency that cannot be offered through the traditional methods – and it leaves very little opportunity for candidates to provide illegitimate information.

At the same time, the platform prevents referees from providing a reference without future accountability for their comments. Written feedback from a specific email and IP address creates an audit trail that discourages fraud.

The transparency the platform delivers also offers empowerment for the candidate, as they’re notified of the progress of their reference check throughout the process.

This ensures that, if a referee has taken some time to respond, the candidate is aware and is in a position to follow up with the individual.

The power is in the candidate’s hands and their chance of securing the job is not dependent upon a busy recruiter.

Of Xref respondents, 82 per cent said they were aware their referee had been contacted, while only 53 per cent of the Australia-wide sample could confidently say the same.

Reduced discrimination by employers While Xref provides efficiency and convenience, other key benefits of the platform are inconsistency and compliance. Xref offers clients the added assurance that they are asking the same, appropriate questions about every candidate for a role.

Only nine per cent of the Xref users had been asked discriminatory questions about a candidate when acting as a referee, as opposed to the 29 per cent in the Australia-wide sample.

Advancements in technology and data collection in recent years mean that good-quality data has become the minimum requirement for business processes.

The findings uncovered in the Australia-wide sample survey demonstrate the real need for improved efficiency in recruiting to avoid candidate fraud, hiring based on inaccurate data and ultimately, money wasted on critical stages of the hiring period.

The number of respondents admitting to deceiving potential employers during the hiring process is representative only of those that were willing to admit to the behaviour.

The likelihood is that the number of people actually doing these things is significantly higher.

Businesses that are not arming themselves with solutions to protect themselves from this risk are exposed.

4 Ways to Make the Recruitment Process More Efficient in 2022

What is Fair Chance Hiring and What Does it Mean for Talent Teams?